In Niederdorf the teams can enjoy modern and well-equipped football facilities. In 2013 a new multifunctional building was constructed at the football field “In der Au”, with new spacious changing rooms, a club bar, garages for the vehicles, a laundry room and multifunctional rooms. In the past, many professional football clubs, such as T.S.V 1860 Munich, Apoel Nikosia, FBC Treviso, Padova Calcio, as well as the Italian National Rugby Team decided to carry out their summer camps and get prepared for championships and international tournaments in Villabassa/ Niederdorf. The football facilities are managed by the local football club, FC Niederdorf, which looks back at a club history of more than 50 years.

The town of Niederdorf is located in the centre of the Dolomites, a famous UNESCO World Heritage Site, at 1,154 metres above sea level, in the eastern part of South Tyrol. The highest mountain in the municipality of Niederdorf is the Sarlkofel with a height of 2,378 metres. Currently, the town has 1,574 inhabitants; for 94.32% percent of them German is their mother tongue.

The town was first mentioned in 994 under the name of “Nidrindorf”, and as a parish first in 1225. During the reign of the earls of Görz and Tyrol the town was the seat of the court. Starting from the middle of the 19th century, and especially after the construction of the Pustertal railway in 1871, tourism became increasingly more important. This development was favoured by natural sites of outstanding beauty such as the  Pragser Wildsee lake, Plätzwiese, the famous Three Peaks, and the thermal baths of Bad Altprags. One of the most famous promoters of early tourism in Tyrol, Emma Hellensteiner, commonly known as Lady Emma, was from Niederdorf.

Niederdorf in South Tyrol is the best place to let your soul rest, to relax. Besides a series of picturesque churches and chapels, such as the parish church, the chapel of Maistatt, the Trinity hospital church and the Church of Santa Maddalena in Moos, tourists can explore the town's flourishing past in the restored “Wassermann House” that hosts the local museum. On several floors visitors get an insight into the development of tourism in this beautiful region. Today Niederdorf continues with this tradition as a popular tourist destination and is renowned for being the first Kneipp for me ® outdoor spa adventure village in Italy. The local park with its Kneipp track is a must-see and a wonderful experience for the whole family. 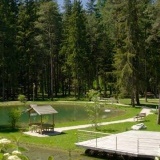 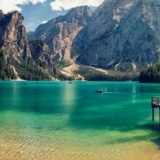