The sports zone of Pfalzen is located at the entry of the village. The football pitch was renovated in 2006, the changing rooms and the whole spectator terrace were rebuilt, including now four changing rooms, a tool shed, a new office and a storage room. The football pitch borders a small sand pitch and an asphalt pitch, which is used in winter as a hockey field. Furthermore there are two tennis courts and a shooting range. The sports bar Pfalzen is integrated with culinary delicacies and its bowling alley. In winter there is small ski lift and a sled run. In summer there is a natural playground for kids on the edge of the forest. From there the new hiking track “Land Art” leads away, which was created by different local artists. The natural football pitch of Pfalzen is managed and maintained by SSV Pfalzen Section Football (founded in 1969). In the summer break also big teams are using the training area such as e.g. the junior team of Inter Milan.

The village of Pfalzen (1,022 m) lies northwest of Bruneck and is regarded as one of the five sunniest villages in the Pustertal Valley. Because of its ideal location oriented towards south, the village received much sun. Starting from Pfalzen and its outlying areas, you can walk the hiking routes of the Pfunders mountains. A particular popular destination is the local Sambock mountain. In Issing, a part of Pfalzen, you find the wonderful Issinger Weiher with the adjacent tight rope course. Pfalzen has some high quality restaurants worth visiting, such as Sichelburg.

Pfalzen has more than 2,700 inhabitants and the majority of them have German as their mother tongue.

The parish church of Pfalzen is dedicated to the holy Cyriak, who was a deacon in Rome and dead as a martyr during the reign of the emperor Diocletian. The church was originally constructed in the gothic architectural style back in the fifteenth century. In 1,851 the church was taken down, except for the tower, and in the years that followed the church was rebuilt, this time in the north-south direction.

In the middle of green fields you can see the chapel Saint Valentine. This field chapel was consecrated in 1,434 and is an important place for pilgrims for the inhabitants of Pfalzen.

In Issing there are two churches, which were built in the fifteenth century. 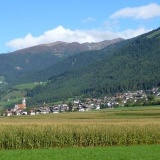 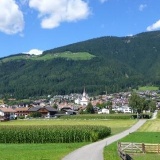 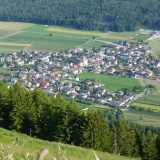 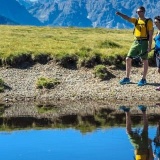 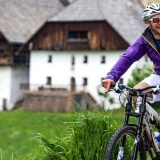